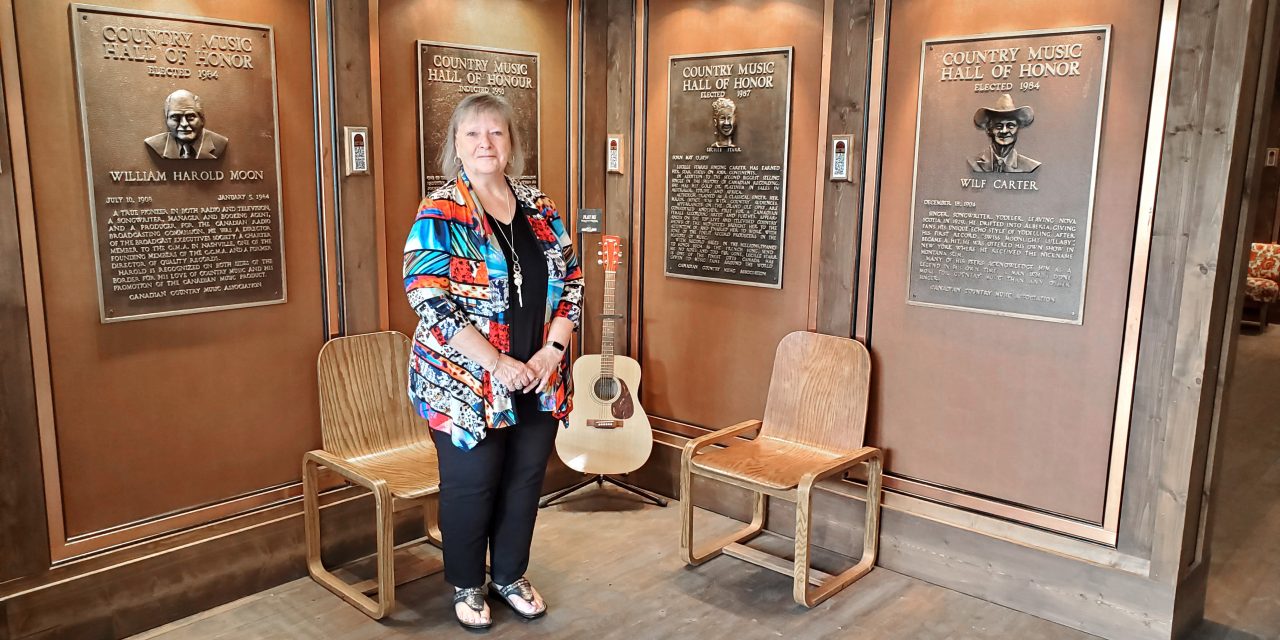 Susan Roline of the Canadian Society of Country Music and Heritage stands before several commemorative plaques at the newly renamed Canadian Country Music Hall of Honour.

Country Christmas Week is here, and a number of organizations are getting in on the holiday cheer. After a week packed with craft fair shopping, parade watching, and hot chocolate drinking, Merrittonians will be treated to a live music performance at the Country Music Hall of Honour downtown.

The Country Music Hall of Honour, formerly known as the Hall of Fame, is located at 2025 Quilchena Avenue. The music museum and multipurpose hall honours a number of country music artists, many of whom are local or have local connections. In past iterations of Merritt’s iconic Country Christmas week, the hall has hosted a Festival of Trees event featuring a number of community-decorated Christmas trees. This time around, they’re bringing out the instruments.

“Saturday night we’re going to have live music, so we have a lot of our local musicians coming out to play,” said Susan Roline, treasurer and convener with the Hall of Honour.

“We have Gary Cooper with Cooper Country, Robert Bertrand, Harley Carmen, Ross Fairweather, Stuart Emslie, and Marilyn Christensen. It should be a really nice evening.”

The event will take place on Saturday, November 26, starting at 7pm. Roline added the music will likely go until midnight. With a full docket of local performers, the evening is sure to have people up on their feet. Tickets are $25.00 each, or two for $40.00, and are available at the hall or Home Hardware on Voght Street. Roline said her organization is excited to participate in the Country Christmas programming.

“We just felt that it would be nice to tie in with the Country Christmas Week, and sort of wrap it up on Saturday night,” said Roline.

“We’ll also be open late on Friday night, the night of the parade. We’ll have a warming place for people to just pop in and warm up.”

Roline added that the collaboration between the Hall of Honour and the Merritt Country Christmas Week Committee has been not only productive, but also mutually beneficial for both non-profit organizations. Roline said the Hall’s board is grateful for the opportunity to participate, and for the attention the week brings to an often overlooked community landmark.

Saturday’s music night is just one event in a holly-jolly week of Country Christmas events, with the iconic week finally returning after a two year hiatus. The COVID-19 pandemic forced the cancellation of the 2020 Country Christmas Week, followed by the November 2021 flooding event curbing any hope of a comeback. In 2022, Country Christmas Week is back and stronger than ever, and organizers are excited to take part.