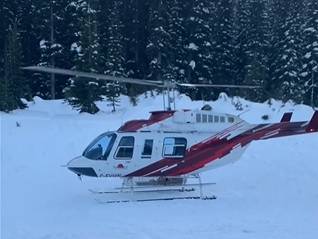 A man on a snow bike was located by helicopter on Sunday, Feb. 6 after being separated from his group on Mt. Thynne south of Merritt, near Brookmere.

When members of the party could not locate their fellow rider, the decision was made to call in a helicopter from Valley Helicopters for a search of the area, piloted by Jesse Pierce. Merritt Snowmobile Club Vice President Adam Douthwright was also brought in as someone who knows the area well.

The helicopter picked up another member of the missing rider’s party and began a search of the area.

“We flew around to the last point where they had seen him, there were tracks everywhere so it was hard to pick one guy and one track out going nowhere,” said Douthwright.

“We turned and were in the sky, and we started working our way down the swamp and that’s when we found him up on a cliff edge. He ventured off into some unknown territory onto a ridge, but the terrain that he was in he couldn’t navigate back the way he came,” Douthwright continued.

“When you’re lost and you don’t know where you’re going, you usually stop or you turn around, but the snow was good and you’re out there for the thrill of it, so he just kept going and going and finally he realized I’m not going to get out of here.”

The man was uninjured and in no immediate danger, but began waving his arms at the helicopter to alert the searchers to his position. The helicopter dropped down low enough for Douthwright to throw out a bottle of Gatorade and inform the man to stay put and wait for help.

Together, Douthwright, Pierce, and the member of the missing man’s party determined the best route to reach the cliff edge and lead him back down again.

Luckily, the story had a happy ending, as the missing man was located and able to ride off the mountain with his friends unscathed, but Douthwright says this may not always be the case if people go out into the backcountry unprepared.

“If you’re heading out into the backcountry, first and foremost do you have the gear?” cautioned Douthwright.

This gear includes an avalanche beacon, a probe and a shovel. Also recommended is an ‘AVY’ or avalanche bag, essentially a backpack with a massive balloon that inflates when activated and keeps you floating on top of the snow during an avalanche, rather than being buried.

As cell service in the remote backcountry is not consistent, alternative means of communication are also important. Douthwright recommends a BCA Link radio.

“It works very well, you can hear it while your sled or your snow bike is running.”

More expensive, but highly effective is an inReach communication device which allows you to text or call for help over satellite and also sends your location coordinates out to searchers.

Anyone who finds themselves in the backcountry whether for work or recreation should carry adequate supplies of food and water, a means of starting a fire and staying warm, as well as a first aid kit.

Knowing where you’re going is paramount to your safety.

“It’s pretty easy to get turned around out there, especially if the weather changes and the fog rolls in,” said Douthwright.

“Being able to pinpoint where you are can be difficult if you don’t know the area, the boundary, the terrain, or the rivers and roads.”

Douthwright recommends calling the local snowmobile club in whatever area you’re planning to visit, or look for maps on their websites.

“Know the area, always have a back up plan and let someone know where you’re going,” Douthwright concluded.