Teddy bears flew as Cents took on the Capitals 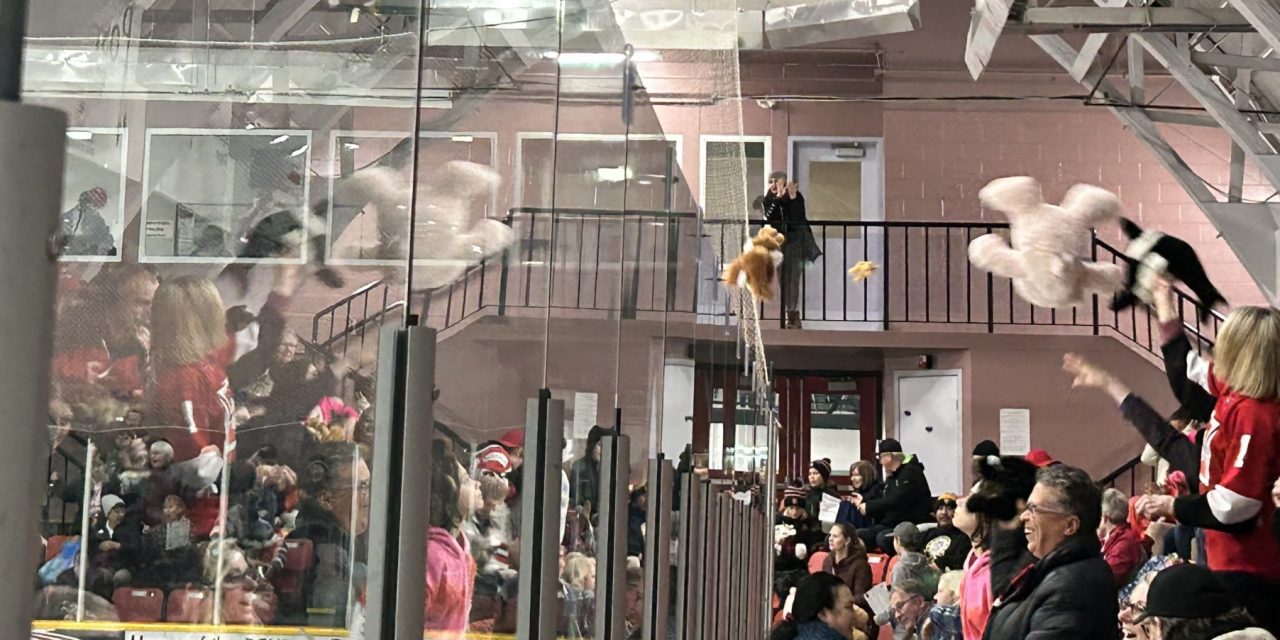 Bears hit the ice as the Centennials scored their teddy bear goal Saturday night, a goal that would be followed by 5 more unanswered. Marius Auer/Herald

The Merritt Centennials brought the heat this weekend, taking home three out of four possible points in their first two games of their home stand. While the Cents ultimately lost to Trail in a shootout, the team dominated Cowichan Valley in a 6-0 shutout.

The action followed two Centennials players, Diego Johnson and Jackson Krill, being named to the roster of the BCHL’s Top Prospects game, a hotspot for NHL scouts.

The action started on Friday’s Holiday Sweater Night, when the Cents faced the 11–11–1 Trail Smoke Eaters at the NVMA. The first period was back and forth, with penalties being called on both sides. At the 13:10 mark, the Cents were caught with too many men on the ice, leading to a power play for the Smoke Eaters.

The third period saw two penalties, and the Cents tie the game with 5 minutes left, when Jacob Smith deflected a puck to score the first goal of his BCHL career. The game went to overtime with a 1-1 score. Despite the 5 minutes of 3 on 3 overtime added, the score was still level. This sent the game to a shootout. Despite a valiant effort by the Cents, Trail was able to capitalize after the Cents’ eight shooter missed a shot. Merritt goalie Johnny Hicks made 33/34 saves during the game.

The second night of hockey action in Merritt, Saturday’s Teddy Bear Toss night, saw a shift in momentum for the Merritt Centennials. Taking on the 6–17–1 Cowichan Valley Capitals, the Cents turned up the heat and produced a 6-0 shutout win. The scoring opened early for Merritt, with Carter Schmidt finding the back of the net just five minutes into the game, sending teddy bears flying onto the ice.

The rest of the first period saw no scoring but a few penalties, including one major. Anton Yatsyshin of the Capitals hit the Cents’ Tyler Bates hard from behind into the boards which led to a game misconduct for Yatsyshin. Bates headed back to the dressing room after the hit and would not return for the remainder of the game.

The second period started off with an interference call against the Cents’ Michael Shara, giving the Capitals a man advantage. Despite this, Cents captain David Patella scored a short handed goal, assisted by Mark Thurston.

With five minutes left in the period, Jaxson Murray scored his eighth goal of the season to make the score 3-0. In the third period, any hopes of a Capitals’ comeback was derailed completely as the Cents went on to score three more goals. Tristan Allen opened up scoring at the halfway mark of the period, followed by new acquisition ??Jackson Murphy-Johnson scoring his first as a Merritt Centennial. Brayden Sinclair, an affiliate player for the Cents, then scored his first career goal in his second career game to produce the final score of 6-0.

The Cents next take on the 24–2–0 Penticton Vees at the NVMA in a rare Wednesday game. Puck drop is scheduled for 7:00 p.m.