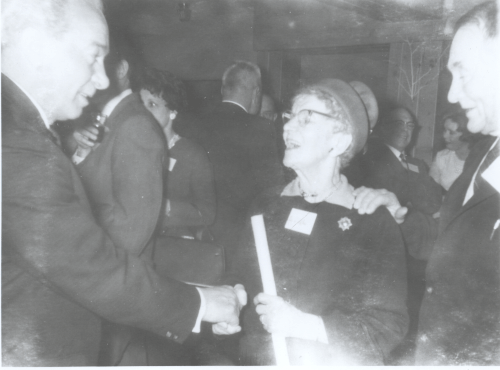 Born in Liverpool in 1886, Sophia Steffens was born to her parents, Mrs. Sofie Steffens and C. Steffens. Shortly after her birth, her father got work in British Columbia, and soon after his family would follow him, arriving in Canada in 1887 finally settling in Kamloops. It was reported that their family travelled on the first train from Montreal to Vancouver before getting off at Ashcroft.

The family moved around for many years until 1903 when her family settled at Mamette Lake here in the Nicola Valley. Her father set up a ranch in Mamette lake where he operated it until his death in 1910. Her father’s death meant a certain amount of financial instability, and Sophia being one of the oldest of eleven children, was sent to work to help provide for her family.

She ended up working in a number of hotels here in Merritt, including as a waitress at the Coldwater Hotel. It wouldn’t be until 1914 that an opportunity opened up for Miss Steffens.

The NVGH which had been opened some 2 years prior, had begun a nurse training program. The Nurses School was a three-year course, the first two taking place at the Nicola Valley General Hospital. These two years were comprised of twelve-hour shifts which included a three-hour classroom session being taught by Dr. Gillis, Dr. Tutill, or the Matron Nurse. The final year was held in Vancouver and comprised of theory.

Sophia Steffens had been interested in pursuing a career, and so was one of the first people to sign up for the program, and consequently, she was the first member to graduate in 1917. This first graduation had some celebration to it, with Mayor Archibald Jackson awarding her with a gold metal, and with M. L. Grimmett, the President of the hospital board of directors leading her in the Florence Nightingale Oath.

From then on for many years, Miss Sophia Steffens would serve as a nurse including working closely with Dr. J. J. Gillis during the Spanish Flu during the fall of 1917. Other family members would later follow in her step, becoming nurses, including Olive Steffens. Throughout her many years as a nurse in the Valley, Miss Steffens worked in a number of different hospitals and in a number of different positions.

She would serve as the acting matron, supervisor, and night nurse at the NVGH. During the height of the Spanish Flu pandemic, Nurse Steffens, alongside others went to work at the Shulus Reserve Hospital to help the native population who had been severely impacted by the Spanish Flu.

Being a nurse is a job that can come with many perils, and Sophia Steffens experienced one of them. In the mid 1920’s, while nursing a patient, Miss Steffens contracted Typhoid Fever and was forced to take a year’s long leave of absence to rest and recover from the disease.

In her retirement she continued to keep busy, she co-wrote the lyrics to the song “The Beautiful Nicola Valley” as well as having wrote a book called “The Land of Chief Nicola”, a history of the indigenous peoples of the Nicola Valley.

In addition to this, Sophia Steffens was an active member of the community, being a big supporter and often times executive of many different organizations throughout the Nicola Valley, including in particular the Red Cross, The NVGH, and the local Liberal Association.

Sophia Steffens would pass away on October 5th, 1976 at the age of 90 and is remembered as being a highly respected member of the community.