TNRD board re-elects Gillis as chair, Kershaw as vice-chair

Via Kamloops this Week

It is status quo on the board of the Thompson-Nicola Regional District after directors re-elected Ken Gillis as its chair and Bill Kershaw as its vice-chair.

On Thursday (Nov. 19), the regional district held its inaugural board meeting and election for one-year terms. Gillis, who is director of Area P (Grasslands, which encompasses Knutsford and other area south and east of Kamloops), has been chair since former Cache Creek mayor John Ranta lost his civic re-election bid in 2018. Since then, Gillis has been acclaimed chair.

Kamloops Coun. and TNRD director Dale Bass nominated Area E (Bonaparte Plateau) director Sally Watson for the position this year. Watson said the last time the board had a female chair was when Pat Wallace was in the post in the 1980s. Watson said she would work together with the board through the COVID-19 pandemic.

She also referred to recent tumult at the regional district.

“It’s been a rough couple of years for all of us, but particularly for Ken Gillis and Bill Kershaw,” Watson told the board. “I think that we need to thank them for their hard work and the tough decisions that were made.”

Gillis said under his tenure the board worked its way through the departure of former CAO Sukh Gill, which he said was “no small event.” He thanked directors Ken Christian (Kamloops mayor) and Robin Smith (Logan Lake mayor) for helping to bring in Randy Diehl as CEO on an interim basis.

“I suggest that the business of the TNRD continued as close to uninterrupted as anyone could ask,” Gillis said, noting the COVID-19 pandemic.

He added that he has worked well with vice chair and Area O (Lower North Thompson) director Bill Kershaw and won respect of TNRD staff.

Gillis ultimately received more votes than Watson and he assumes the role for another year.

Meanwhile, Bass also nominated Clearwater Mayor Merlin Blackwell as a candidate for vice-chair. He let his name stand to run against incumbent Kershaw. Blackwell said the TNRD is in a “time of transition and change,” citing transition toward a new generation of regional district leaders in the coming years.

The board re-elected Kershaw.

Vice-chairs in the past five years include Ronaye Elliott, Steven Rice and former director Willow MacDonald. 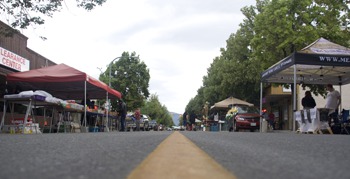 Earth Rangers to visit local elementary schools in the valley