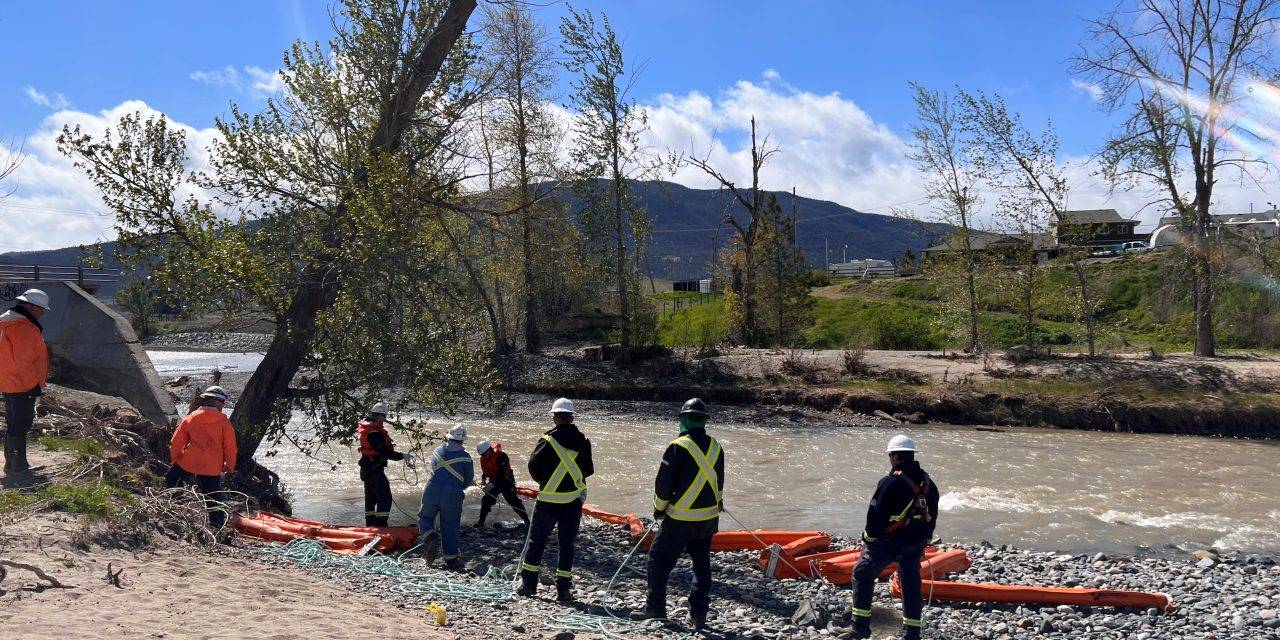 Oil spills can be devastating to the environment when addressed inadequately, and development corporation Trans Mountain focused on preventative and responsive training efforts during a two-day spill-response practice exercise in Merritt.

Merrittonians may have noticed increased traffic at the Coldwater River near Voght Street on May 17 and 18, as both land and water-based training took place. Equipment such as oil response trailers, response boats, and containment booms were used to demonstrate proper oil spill response.

“We conduct anywhere between 20 ad 30 trainings per year around our (pipeline) system. We move those trainings around to make sure we get an understanding of the various operating conditions we could respond under,” said Kelly Malinoski, director of emergency management for Trans Mountain.

The Merritt Fire Department was also involved in Trans Mountain’s drills, lending a hand to make sure all went smoothly and working in cooperation with the pipeline company to promote safety in the community.

Trans Mountain says that this initiative is part of its Emergency Management Program (EMP), and hopes to validate its emergency response plans and tactics. Refreshing personnel on response tactics and exercising equipment keeps prevention and mitigation top of mind.

Using a system of mitigation, preparedness, response, and recovery, the purveyor of the pipeline expansion near Merritt hopes to ensure the safety of both workers and their environment. No oil or simulated products were released during training, in keeping with environmental standards.

“It was time to come back to Merritt to do an exercise there. We picked the Coldwater River beauce we had done the Nicola River last time,” added Malinoski.

The Trans Mountain Expansion Project recently celebrated a major milestone, reaching 50% completion of the pipeline that now runs through the Nicola Valley. No major spills have been reported to the Canada Energy Regulator during this time.

The City of Merritt and Trans Mountain have mutually benefitted from recent partnerships, such as a $950,000 investment by Trans Mountain into the City’s waste treatment system announced last year, which will in turn provide services to contractors such as those working on the pipeline.

“We’ve been undergoing updates to our emergency response plans over the past several years as a result of the expansion project. We’ll be coming back next year to update our geographic plans.”