UPDATE: Support for Kengard residents still coming together in wake of fire 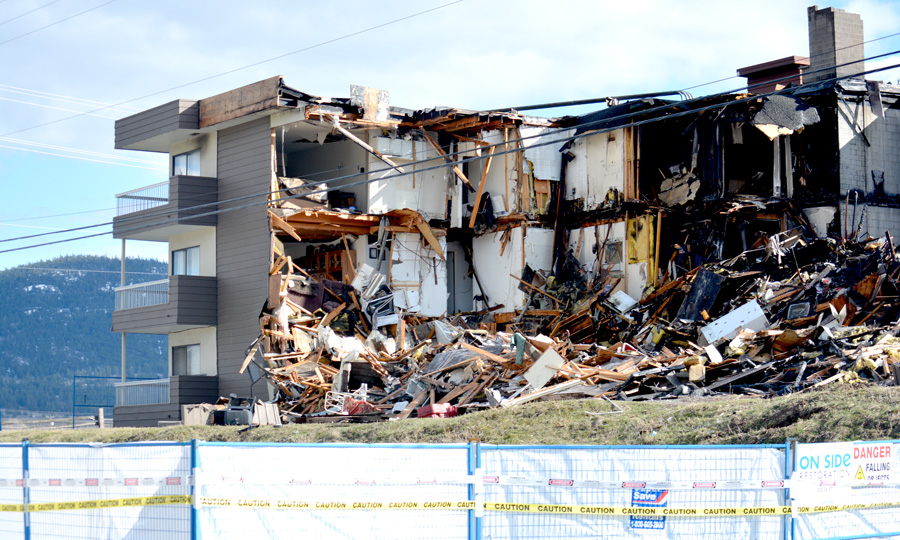 The north wing of the Kengard Manor apartment building was being torn down on Monday afternoon. (Cole Wagner/Herald).

Selective demolition of the Kengard Manor apartment complex got underway Monday, the same day a two-week extension of food and housing subsidies offered to the displaced residents officially ended.

Though the building’s north wing was deemed to be structurally unsound following a major fire on March 16, there are currently no plans to demolish the building’s south wing, emergency services co-ordinator Sky McKeown confirmed to the Herald.

Immediately following the fire, the city’s Emergency Social Services (ESS) team was able to provide displaced residents with vouchers for food, lodging and incidentals for 72-hours. However, during that 72-hour period, ESS successfully applied to Emergency Management BC (EMBC) for a two-week extension of the coverage, to allow residents time to find a housing solution in light of low-vacancy rates in Merritt.

“That was unexpected actually — two weeks is a long time. We were lucky,” said Melisa Miles, corporate officer for the City of Merritt. “It seems like the ESS team really knows what they’re doing, so it was a smooth transition for sure. You know, it’s a horrible event but glad we had everybody on the ground and able to help out.”

She added that housing management and lodging assistance for the residents is now being co-ordinated through the ASK Wellness Society in Merritt.

After being tasked with connecting the displaced residents with housing in the region, the ASK Wellness Society’s housing team connected with 62 residents in the aftermath of the fire, said Cher Doolan, director of operations for ASK Wellness in Kamloops and Merritt.

Of those 62 connections, 32 people followed up with the society to find accommodations. Despite a low rental vacancy rate, most of those people managed to stay in Merritt, said Doolan.

“I think the majority ended up still in Merritt, for the most part. There were definitely some who ended up elsewhere,” she said, adding that “some ended up in Prince George, Logan Lake and Kamloops.”

Doolan also praised the work of a number of local non-profit groups, real estate agencies and government bodies who assisted ASK with connecting residents to housing.

Whether anyone will live at the Kengard Manor apartments again, is another question.

The now-demolished north wing of the Kengard Manor complex incurred significant fire damage on March 16, while the south wing was engulfed in smoke but did not burn, explained Merritt’s Fire Chief Dave Tomkinson.

“We’ve received a copy of the structural engineers report that deemed the structural stability of the north wing as questionable, so that prevented us from entering it,” said Tomkinson. “So we’re trying to work with the insurance company and the insurance company’s fire investigators, and we’re hoping that they will selectively demolish that portion of the building around what we believe is the area of origin [of the fire].”

If the building must be demolished entirely, the fire department could be forced to conclude their investigation of the cause of the fire, Tomkinson went on to explain.

“We’re not gonna put our people in a high risk area,” he said.

The area of the building integral to the fire investigation is located in the north wing of the building, explained McKeown, but firefighters will have to wait and see whether the clean-up crews can preserve enough of the area for investigators to take another look following the demolition process.

Meanwhile, the Merritt Chamber of Commerce is working with a group of Merrittonians to decide how best to distribute the funds collected on behalf of those displaced by the fire.

Funds are still being collected at both the Interior Savings branch and the Chamber of Commerce office, explained Etelka Gillespie, manager of the chamber. In the next few days the group will meet to decide how best to distribute the cash.

“We’re open to collecting and people have been generous that way, but we need to deem how we’re going to be dispersing it,” she said.

The Chamber of Commerce also helped to set up the donation centre, currently occupying space at 2190 Voght Street. Displaced families have been able to access the centre already, and Gillespie said organizers are encouraging those families to share their needs with the centre in order to streamline donations.

“We’ve connected with families and they’re going down as often as they can to check out what’s there. And we just encourage them to create a needs list that we can put on the Facebook site. If people want to interact with the families that way, they can. Or they can just check out the list and drop off stuff at the centre,” said Gillespie. The Facebook page can be found by searching for “Merritt Chamber of Commerce Kengard Manor Fund Page.”

The centre is expected to stay open for about a month, she added, but is in need of volunteers to be onsite between 1 p.m. and 4 p.m. Monday to Friday, when the centre is open for business.

This post was updated on April 5 to include comments from the ASK Wellness Society, and the city’s emergency preparedness co-ordinator. 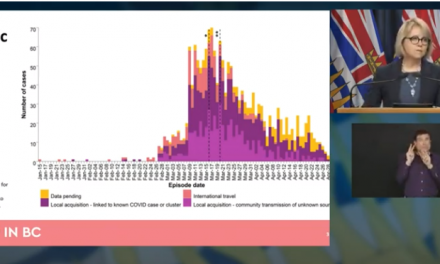 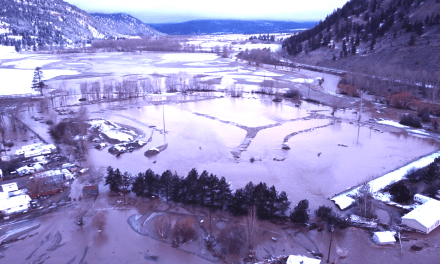 Mike Goetz to do a commemoration walk along the flood zones 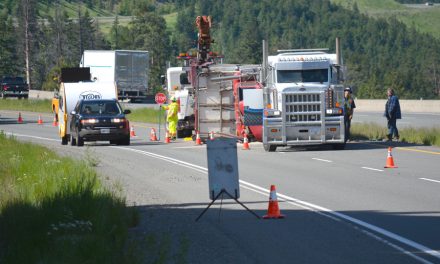