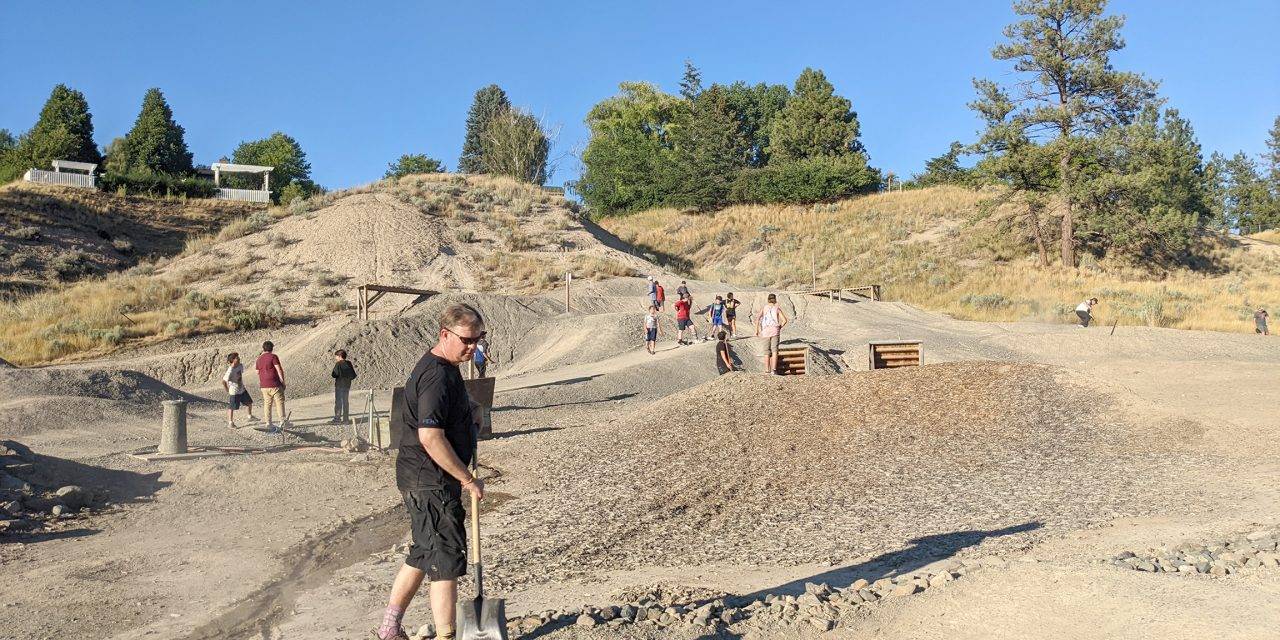 The Rotary Bike Skills Park is a facility used by mountain bike enthusiasts across the Nicola Valley. With the constant use of the area, maintenance of the park is regularly required. Luckily, Breathebikes, in collaboration with he Merritt Mountain Biking Association, have organized a ‘Bike Work Party’ where riders ages 12 – 18 are invited to help clean up the park. The organization of this community event will not only help maintain the grounds but will also strengthen the biking community in Merritt.

Since August 17, young riders were invited via social media, local radio, and word of mouth, to the Rotary Bike Skills Park to help with clean up efforts. The one hour clean up sessions happened every Wednesday at 6 p.m. for five consecutive weeks.

“The in the park has a lot of gravel in it,” Travis Fehr described.

Fehr is the owner of Breathebikes, as well as a board member of the Merritt Mountain Bike Association.

“The gravel works its way up to the surface as it gets used, ridden, and rained on. The gravel builds up and requires regular sweeping to be taken out. We go in with wheelbarrows and we haul the gravel off to the side to get it off the riding surfaces. We also have hoses out there to replace the leaky ones and we have put the featured stones, that were moved over time, back to their original spots.”

Located along Voght Street, the Rotary Bike Skills Park features 10 full jumps, two wooden ramps, a wooden wall ride, three wooden drops, and 12 rollers and berms. The park has been open to the public for many years and has undergone a redesign four years ago, incorporating less wood features as the material rots over time.

“I really like this concept,” said Jordan Pinto, President of the Merritt Mountain Bike Association. “It’s a really good idea because it gets the kids out and teaches them how to properly maintain the grounds because as they grow up they’re going to use it more and more.”

Pinto added that the clean up is a great help as it addresses the need for maintenance by teaching the kids who use it the most on how to properly maintain the area. Right now taking care of the grounds is the responsibility of the MMBA, however as the organization only has volunteers, clean ups aren’t done on a consistent basis.

“I’ve been going after grant funding to bring someone in like trail crews but we haven’t achieved that yet.”

Each Wednesday the bike park saw an average of fifteen volunteers hard at work, maintaining the grounds for smooth rides in the future.

“The kids are overall happy to help,” said Fehr. “They are hard working, in part because they realize there is a prize to be won but also they realize we are making improvements to an asset that they use and enjoy so it makes sense to them. I think they also get a sense of satisfaction out of participating in a community event along with fellow riders they look up to.”

The five-week volunteer event will culminate in a ‘Bike Park Jam’. On September 18, Breathebikes and MMBA will host a barbecue lunch celebration for the efforts of the young volunteers. There will be food, door prizes and of course people get to ride the newly maintained bike course.

“Running a bike shop, It makes sense to have the biking facilities be in good shape,” said Fehr. “It was also important to involve the kids, have them out there be active, with the hopes of winning cool prizes, and help them get more into biking.”

Professional trail builder, Luke Beers will also make an appearance during the event. Beers was contracted by the Merritt Mount to redesign the bike park four years ago.

The highlight of the jam will be the grand prize draw. Breathebikes will award a 2022 Radio Asura Pro Dirt Jump to the lucky entrant that gets drawn. Volunteers who’ve spent time at any of the cleaning sessions earn themselves an entry to win the bike, which is valued at $1499.

The Bike Park Jam is set to take place on Sunday, September 18, from 11 a.m. to 3 p.m. The event will be open to the public and people are encouraged to come out celebrate and ride the course.