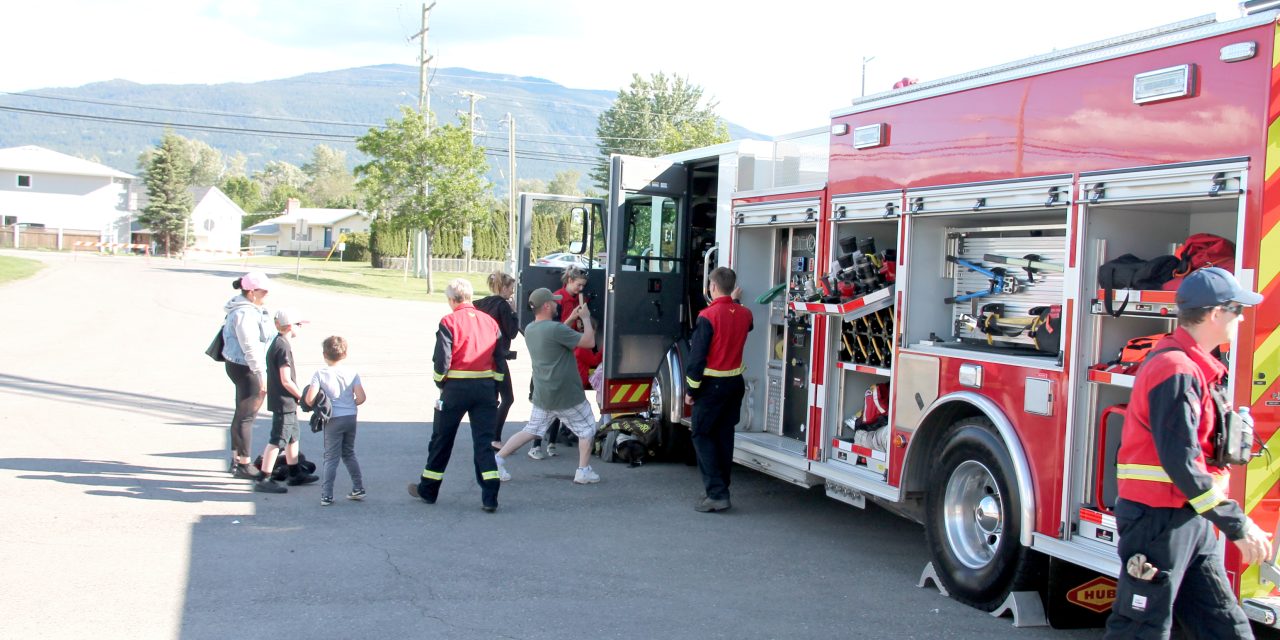 Families line up to take photos in one of the Merritt Fire and Rescue Department’s fire engines. Marius Auer/Herald

Community members, businesses, and nonprofits alike came together to raise awareness about the upcoming wildfire season in BC, with a plethora of vendors, informational sessions, and games educating residents to become ‘Firesmart.’

Despite the wind, and the presence of a new wildfire on Merritt’s Mountain Drive, the Merritt Fire and Rescue Department and BC Wildfire Service put on a great show for community members. Hundreds of Merrittonians attended the event and played games, won prizes, and engaged local emergency services to learn about the dangers of wildfire.

“It’s been nice and busy. I think we’ve got a good complement of vendors, which is awesome. There’s lots of people here to talk about wildfire and safety, and lots of community members out here to learn how they can protect themselves and their families,” said Krista Minar, emergency management coordinator for the City of Merritt.

“What we need to do as a community is work together in our neighbourhoods to reduce the risk that we have. It’s not just one home doing its part, it’s the whole neighbourhood.”

Attendees to the event at Central Park were given the opportunity to ask questions of local stakeholders such as the Conservation Officer Service, both the Lower Nicola and Merritt Fire and Rescue Departments, BC Wildfire, and private businesses mainly based in outdoor sports and safety services. Open

Air Cinemas provided a free-of-charge screening of ‘Only the Brave,’ a movie about a fatal 2013 wildfire in Yarnell, Arizona. Prizes and free merchandise, such as smoke alarms and mugs, were given out to support the Firesmart cause.

Firesmart is a community based program by the BC Forest Safety Council which promotes the collaboration and cooperation of community members to prepare for wildfire season, and its principles suggested to municipalities have been proven effective during events such as the 2021 Logan Lake fire. Minar added that people are often mistaken about the causes and proper preventative measures, but the event has allowed for many educational opportunities.

“I’m seeing some lightbulbs kick in. A lot of people are afraid of the flames, but today we’re talking about firebrands and embers and how it’s that little source of ignition that nestles in somewhere.”

Merrittonians can best prepare by increasing the amount of wildfire resistant vegetation on their properties, preparing 72 hour evacuation kits, and ensuring that they have an evacuation plan in place to keep themselves and others safe in the event of an emergency. In most cases, a wildfire can approach in ways other than may be expected.

“What we know about how wildfires move is that it’s not a ‘wall’ of flames like we sort of imagine. What happens is that embers come far in front of the fire itself. It could drop fire brands all over, so there is nowhere in town that is free of wildfire risk,” added Minar.

“We have an abundance of cedars within the city. They’re extremely flammable, and they give off a lot of embers in their own right. We see a lot of flame length and ember production because they burn so hot and so fast.”

Community members who implement certain Firesmart principles, such as upgrades to fixtures and properties not meeting standards, are now eligible for a rebate of up to $500 through the City of Merritt. Both the City and the MFRD are looking to continue education and awareness efforts surrounding fires in the community.